Are you scared of bats? Blame Hollywood, not bats! Real Bats are not evil or scary––or related in any way to Dracula. Out of the 1300 bat species on Earth, NOT ONE wants to drink your blood!

Bats, given the choice, would never associate themselves with Halloween or Hollywood. They’d prefer to go quietly about their business, unseen and undisturbed. And we should let them! Their success affects all of us.

Bats are unsung heroes. They pollinate our crops and eat tons of insects that would otherwise plague us. (Mosquitoes, stink bugs!) According to the Center for Biological Diversity, the economic value of bats to agriculture is estimated to be be up to $53 billion dollars a year!  They are a vital benefit to our food chain and to our economy along with other native pollinators, like bees, butterflies, moths and birds.

One bat can eat up to 6,000 mosquitoes in one night. Bats are actively protecting you from the creatures who do want to drink your blood! Are you starting to love bats now? Join the fan club!

Join The Bats of the World Fan Club

More reasons we love bats and do not want to live without them:

Bats are the only mammals that fly!

Sure, there are a couple who can ‘glide’, but bats are seriously winging it out there. There’s far less research on bats and flying, only 7 out of the 1300 species has been seriously studied. But here’s one study that blows the doors off: Airplane tracking documents the fastest flight speeds recorded for bats

The scientist who clocked the Brazilian Free-tailed Bat’s top speed called it a “Holy Cow” moment and said he suspects this species may not even be the fastest bat out there. Only 1293 species to go! 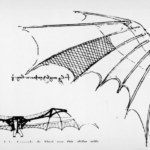 A study of bat wings from Leonardo Da Vinci’s sketchbook. While designing his flying machines, Leonardo also obsessed about bats.

Bats have inspired countless innovations in sonar with their special navigation system. For a good explanation of echolocation and to hear what it sounds like (slowed down for human ears), watch this video by David Attenborough.

Think it’s easy? Try teaching yourself how to echolocate like a bat.

Bats don’t crash into each other.

Despite large groups of them flying closely together at high speed, they all arrive alive. Scientists and engineers are studying how bats use echolocation collectively to avoid in-air collisions to develop safer self-driving cars. (How about the future of non-crashing, high speed flying cars, while we’re at it?)

Because bats are cool. Literally. It’s easier for bats to regulate their body temperatures at night, while they are working so hard to chase insects. Some of the tastiest insects also come out after dark: mosquitoes at dusk, followed by moths, beetles and crickets, among others. At night, there are fewer predators to avoid and less competition for food.

Bats recognize each others voices.

How else could you recognize your friends in the dark?

Bats truly know how to relax. Hanging upside down completely relaxed; expending zero energy to hold on. Their foot and claw tendons are sheathed with a special “locking system”. Gravity and weight lock them tight when pulled down, kind of like when you extend a Chinese finger trap.

Hibernating bats hold on for the duration effortlessly.

Bats are shy and gentle.

The only reason a bat would come anywhere near you is because you’re a mosquito magnet! Seriously, if a bat is swooping toward you with any kind of intention, it’s to feast on the mosquitoes hovering around you.

Bats hang with their besties.

Bats are intelligent, highly social and choose their friends..

Bat colony society is complex and dynamic! Researchers have found that bats maintain long-term relationships within their colonies. A bat definitely prefers to roost with some individuals rather than others, but also maintains loose relationships with other colony members.

Bats are essential to our ecosystem AND our economy.

Bats are epic pollinators, too. Not to dis our bees in any way, but bats may be even more critical to our food supply, in many parts of the world. They are larger than bees, are covered with fur that grabs more pollen and are powerful flyers that cover greater distances when seeking food sources.

It’s estimated that bats pollinate over 750 species of plants around the world, including 300 species of fruit, 450 commercial products and 80 medicines. See how much we take bats and their contribution for granted?

No nectar-feeding bats = No tequila. Simple.

95% of rainforest regrowth comes from seeds that have been spread by fruit bats.

Even bat poop (guano) has fans!

Guano is a powerful fertilizer and it’s highly-prized by farmers cross the globe.

Historical drama and intrigue during 150 years of guano mining is on par with that of gold mining! See ‘When the Western World Ran on Guano‘.

Because everyone wants to know how they do THIS:

Producing guano is one activity that bats do NOT do while hanging upside down. They flip. Do their business. Flip back. Bats are fastidious about stuff like this and probably spend more time grooming than we do.

People (also known as mammals) who refer to bats as “flying mice” are dead wrong! Don’t let them talk about our cousins that way! As a species, bats are closer to humans genetically, than they are to rodents. For reference, bats are as close to us genetically as dogs are.

Bats and humans go way back.

And lastly, here’s a curated selection of bat-related items—cultural, historic and scientific—in the Smithsonian Institution collections.

Why We Celebrate Bats

With all there is to like about bats, is a week really long enough to celebrate them? (No!)

There are still a lot of mysteries about bats. The more we find out about bats and the benefits they bring, the more we realize that their survival is entwined with our own. BatWeek is part of a huge international effort to raise public awareness, enlist Bat Heroes and promote research.

It’s appropriate that BatWeek ends on October 31st. Halloween is the best opportunity to educate and change perceptions about bats. Scary (and silly!) caricatures of bats are everywhere! Make sure your children and grandchildren discover the fascinating truth about these amazing animals.

Visit BatWeek.org and celebrate REAL bats this Halloween. Attention Parents & Teachers: The BatWeek website has lots of fun and educational activities to download.

The Real Horror is White-nose Syndrome

Learn the truth about bats and you’ll never be scared of them—You will likely be more scared FOR them, because they face serious threats to their  survival, like White-nose Syndrome (WNS), that have killed millions of bats in the last decade.

How We Can Help Our Native Bats

We can all help by joining a bat conservation organization, like Bat Conservation International. or making a donation to a bat rescue/rehab center like Second Chance Wildlife.

Each of us can make a difference!! Right in our own backyards. All our pollinator gardens can support Birds, Bees, Butterflies AND Bats. We can put up bat boxes and make our backyard micro-habitats bat-friendly. To find out more about bats and how you can help, see our resource page: How to Support Native Bats in Your Backyard.

Who knew Maryland has 10 documented native bat species? Let’s all learn more together!

Simple! Just call us. No need for online form or email ordering now that the store's open for indoor shopping.

For now, masks are required (and much appreciated) inside our store.